For decades (TAG) Heuer, and pretty much every other watch house out there, offered a rather monochromatic range of dials. In the early years, enamel white reigned supreme, but was followed by the hegemony of black, silver/grey and white. And for good reason, these are colours (or, more specifically, tones) that aren’t subject to whims and the vagaries of fashion

Every now and again, when we were lucky, a copper, champagne or cream dial came along to break the mould a little, but the tones still ruled the roost. And then came the (swinging or otherwise) sixties and even more so the seventies and we start to see colours coming along too.

And even a red or two:

But the widest impact and the one colour that really stuck was blue. The first Skipper kicked off with a liberal range of colours: 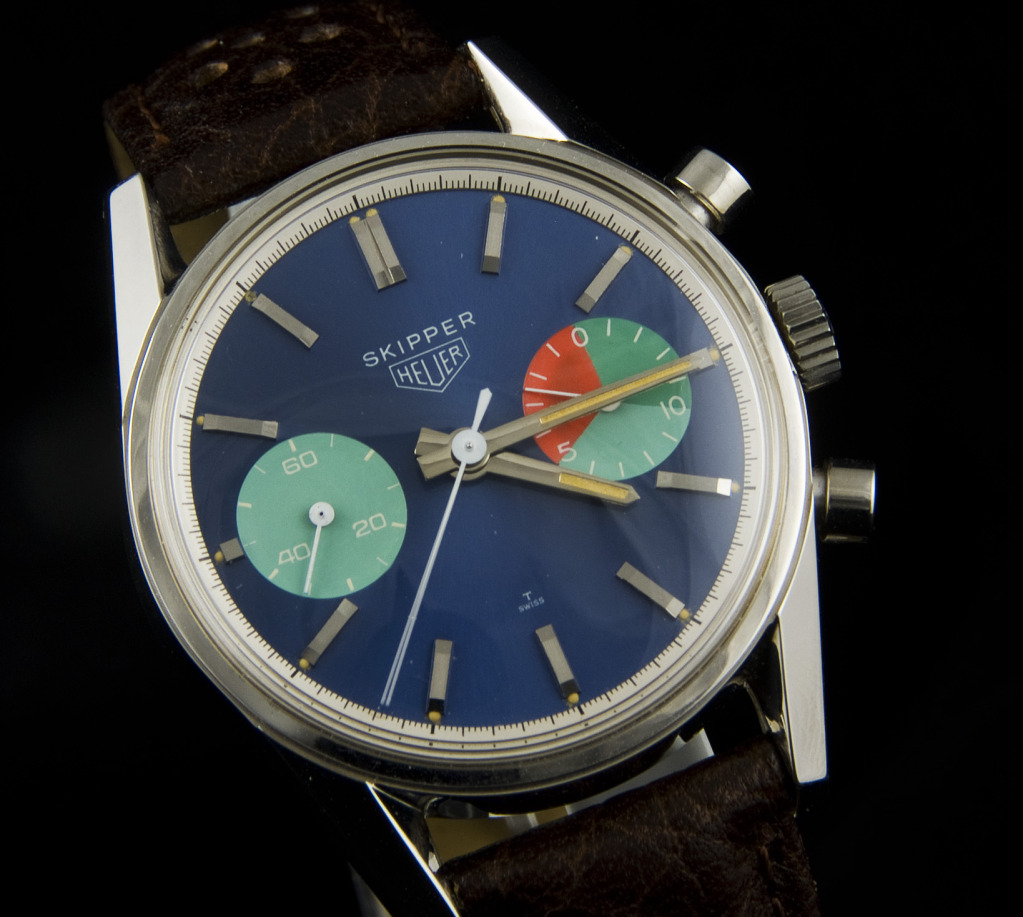 The Monaco is of course well-known for being blue:

But there were also blue Carreras, Montreals, Silverstones, Daytonas… the list goes on. Not really less serious than the blacks and silvers but able to give more variety, blue caught on and became something of a mainstay of the range.

Fast forward a few years though, and we see blue on the Formula 1 but the monochromes are reasserting themselves on the more upscale watches, and champagne has really crashed into their party too. Blue is starting to feel a bit left out in the cold.

Let’s jump forward again, this time all the way to the present day. Want a TAG Heuer with a blue dial? Then choose a Monaco, there are several in blue. Or an Aquaracer. Oh, you wanted a Carrera? That was trickier, the Carrera was typically available in the classical tones. Until now.

The Carrera 1887, previously available with black, silver or anthracite dials, can now also be had with a blue dial from 2013.

The dial is a deep, almost midnight blue but with a subtle starburst graining that allows it to catch and scatter the light and appear lighter on parts of the dial.

The Tachymetre scale is in complementary colours, and the registers are also finished in the same deep blue.

Perhaps not immediately clear from the photographs are the changes to the 5 element bracelets for the 2013 model year. Looking very similar to the previous bracelet, the individual elements are now more rounded, making for a more comfortably fitting bracelet that adapts more readily to the shape of the wrist.

The watch will also be available on a blue leather strap:

Summing up, I feel this will be a successful variant of the 1887 Carrera. The original dials are available still, but the blue gives an interesting alternative, and one that adapts and changes with the light but is always attractive. In fact, it may be my favourite of all the 1887s!