A comparison that I’ve meant to post for a while now is the comparison between the original Heuer Monaco and the modern TAG Heuer Monaco. While the Monaco was re-introduced by TAG Heuer in 1997, the first re-editions were black-only and it wasn’t until 2003 that collectors could once again buy an iconic blue Monaco, the colour made famous by Steve McQueen.

There seem to be two approaches that TAG Heuer have taken with their re-edition range- the first is the “reproduction” re-edition and the second is the “modernised” re-edition. The first category is where every attempt is made to make the “new” model look as close as possible to the “old” model- for example, the first Carrera re-edition with the Lemania 1873 manual-wind movement and the current Silverstone re-edition. The second takes inspiration from the vintage model, but attempts to modernise the design to make it more contemporary, for example the Autavia re-edition and, as you’ll see, the Monaco re-edition.

While these are detailed changes, the shape of the case and the dial design are identical between the 2005 and 2010 TAG Heuer models

The Heuer Monaco used in this comparison is ref 1133B, the famous Calibre 12 powered watch (not many were made with the Calibre 11 movement) from around 1972 with the flat blue colour (hence the “B” in the ref. number). Earlier versions of the Monaco had a metallic blue dial and flatter, square hands (see below), but it’s this version of the Monaco that is the most common, if you can use that word to describe the vintage Monaco.

While its popular to think of the original Monaco as being a “square” watch, it was actually flat across the top of the case and featured a prominent curve along the side of the case, making it look wider than it was tall. The TAG Heuer Monaco also has a curve along the side, but its far less pronounced, as you can see below:

The impact of this change makes the modern Monaco look squarer and taller than the original. Personally, I prefer the wider design of the original Monaco, but each to their own- I suspect that the newer shape is less polarising than the original, which it mustn’t be forgotten was a spectacular failure when launched in the 1970s. By the mid-late 1970s the Monaco was gone and forgotten, until TAG Heuer began to focus on its heritage, some 20 years later.

The majority of Heuer Monaco 1133B’s came with the Chronomatic Calibre 12 movement, despite popular belief reinforced by TAG Heuer marketing today that the original Monaco used the Calibre 11 movement. The Calibre 11 movement was only used in the Monaco for a few months from its launch in 1969 and was quickly replaced by the Calibre 11-I and then the Calibre 12  in 1971. This Calibre 12 is part of the Chromomatic family of movements and was a Buren base movement with a Dubois-Depraz chronograph module. One feature of the Chronomatic movements that often confuse new owners is that there is no seconds hand measuring time (the central hand is the Chrono seconds hand) and so no sign that your watch is alive and working until you see the minute hand move.

The Calibre 17 movement used in the TAG Heuer Monaco is a ETA derived movement, based on the ETA 2894-2. As noted above,  the 2010 Monaco uses a Calibre 12 movement, but one that has nothing to do with the original Chronomatic Calibre 12- the two Calibre 12s share only a name.

Perhaps the number one complaint from vintage Heuer collectors about the TAG Heuer Monaco is the design of the pushers. The original design used round pushers with fluted edges, which TAG Heuer decided to change to a flat, square design for the re-edition. The fluted pusher design was used by Heuer all throughout the 1970s and so its a shame to have lost this design feature from the Monaco. The Silverstone re-edition uses a design that is closer to the original fluted finish, and is all the better for that change.

Famously, the Chronomatic movement required the crown to be moved to the left-hand side of the watch, a feature that TAG Heuer offer today on some re-editions (Silverstone, 40th Anniversary Monaco, Autavia) purely for cosmetic impact. The standard modern Monaco has the crown where you’d probably expect to see it- on the right-hand side.

It’s perhaps surprising how different the two dials are when you hold them next to each-other. The TAG Heuer Monaco has a metallic, deep blue dial with a star-burst finish, while the Heuer Monaco has flat, pale blue colour

You’ll also notice that the red-tipped hands have been replaced with squarer-edged silver hands. The good news is that TAG Heuer didn’t just make these changes for the sake of fashion, but instead to reflect the colour scheme of the very first prototype Monaco (also ref. 1133B), which had the same metallic blue dial and square steel hands, as you can see on the fantastic Chronomatic example below.

The TAG Heuer Monaco has been a huge success since its re-introduction in 1997- far more popular than the original ever was. While there are several details that have changed between the original and the modern version, its clear that the essence and daring of the original design shines through in the re-edition. Which do I prefer? It has to be the Heuer Monaco, not just because it was the original but also because I prefer the shade of pastel 1970s blue and the quirky design of the hour-markers and crown placement.

Someone at TAG Heuer must have also liked these features, because when it came time to launch the 40th anniversary Monaco, the design was much closer to the Heuer Monaco 1133B:  as you can see below, the colour of the dial, hands, crown placement and dial lay-out faithfully replicate the original- even the date-window surround makes a comeback. 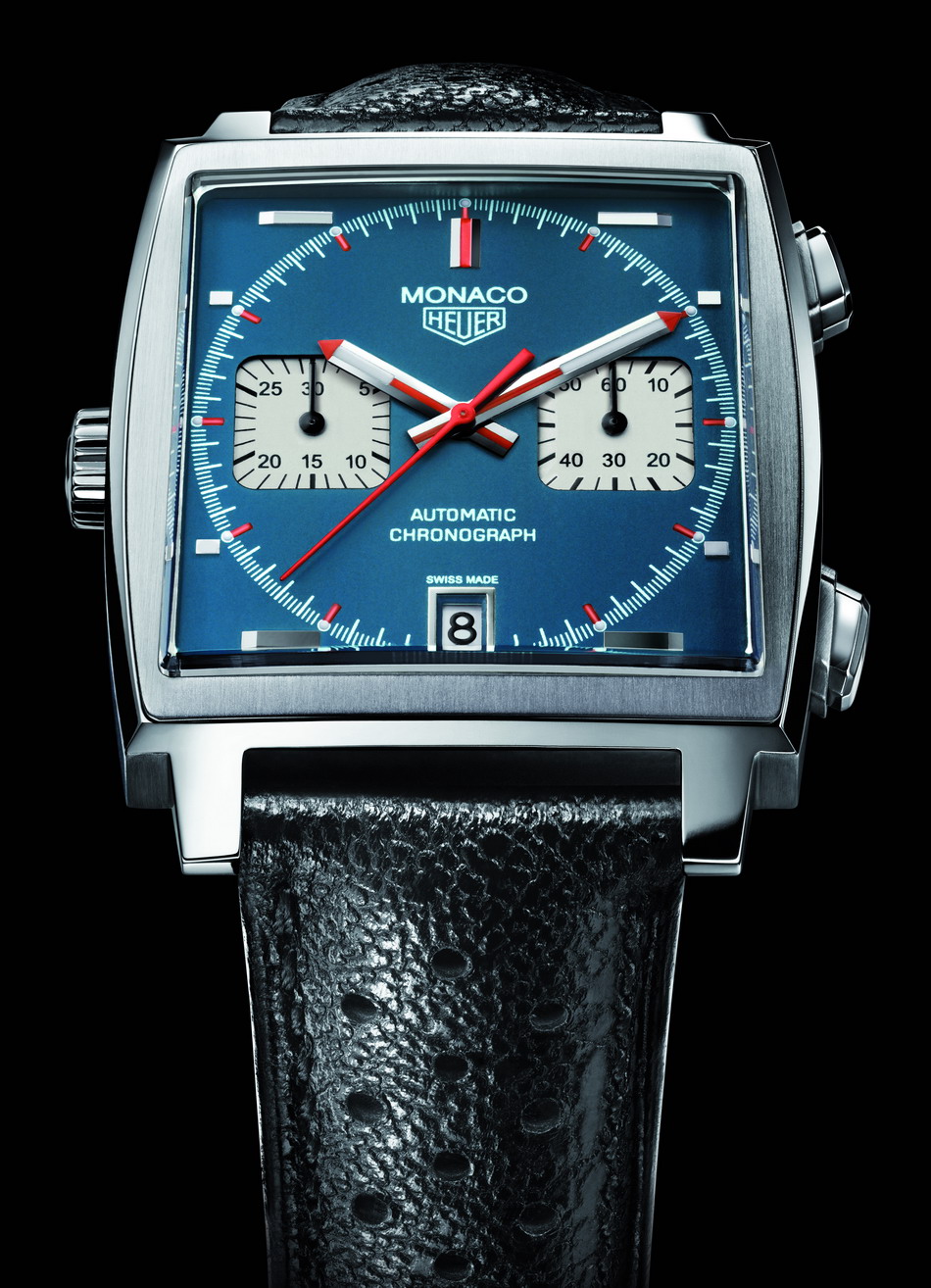 So, modern or vintage? A tough call and it probably depends what sort of collector you are- for many people, the thought of owning a 40-year old watch is daunting compared to the ease of servicing and looking after the reliable modern equivalent. For me its vintage, but I can appreciate the other choice and its great to have the option.

The last factor is of course price- while a good vintage Heuer Monaco may set you back close to USD10,000, the modern equivalent is available for around a third of that price, which makes it far more accessible, even if that original Steve McQueen magic has been slightly diluted during its 20 year hiatus.