This week’s Calibre 11 post is the first written by Mark Moss, a long-standing member of the forum OnTheDash.

As you can guess from this, Mark’s area of specialty is the Carrera range, but when it comes to researching any flavour of vintage Heuer, few match Mark’s expertise and eye for detail, so I’m delighted to have Mark contribute this experience and knowledge to Calibre 11.

With gold reaching record prices (£990 an ounce as I write, and rising), it’s little surprise that many watch houses have precious metal watches in their ranges.

TAG-Heuer not least amongst them; it’s one of the ways of softening the blow of the prices of the watches bearing what are still close to being prototype movements. David has already written about the platinum and rose gold versions of the V4 Monaco.

But that might suggest that TAG-Heuer only recently joined the precious metal bandwagon and that’s not really the case (excuse the pun, I have a habit of using that phrase unconsciously when writing about watch cases…). Precious metal cases have been something of a mainstay of the re-editions, with every model line having at least one example. Outside of the Classics line, watches like the 2000 and the ladies’ Alter Ego line have also had solid gold versions.

What might come as more of a surprise to some though, is that Heuer also has a history of precious metal watches dating back prior to the acquisition by TAG. It’s something of a readily accepted truism that “tool” watches like the chronographs and dive watches made by Heuer are more desirable and collectable in steel than precious metals, but I hope to demonstrate that’s not always the case (don’t say I didn’t warn you) as we take something of a potted history tour through Heuer and TAG-Heuer’s precious metal watches. I’ll be picking out some personal favourites rather than trying to cover every watch so please excuse me if I miss out some of your personal favourites, but feel free to tell us about them if so.

Heuer always made more stopwatches than it did chronographs, even in its 60s and 70s heyday. Way back at the turn of the 20th century and even into the ‘20s though, wristwatches of any sort from Heuer were thin on the ground with pocket watches still being more prevalent.

However, a number of these were already being converted so they could be worn as wristwatches and it was becoming clear that the wristwatch would soon outstrip the pocket watch in popularity.

And the earliest Heuer in precious metal I have found is one such, in 925 Sterling Silver:

Silver was a familiar material from making pocket watches but seemed to fall out of fashion for making wristwatches. The increasingly availability of quality, more corrosion-resistant and undoubtedly cheaper than silver steels would soon relegate silver to something of a historical footnote in terms of watch cases.

Certainly, by the time we look at brochures from the ‘40s, we see that steel is the default material but interestingly, we also see that many of the watches are also offered in gold versions. 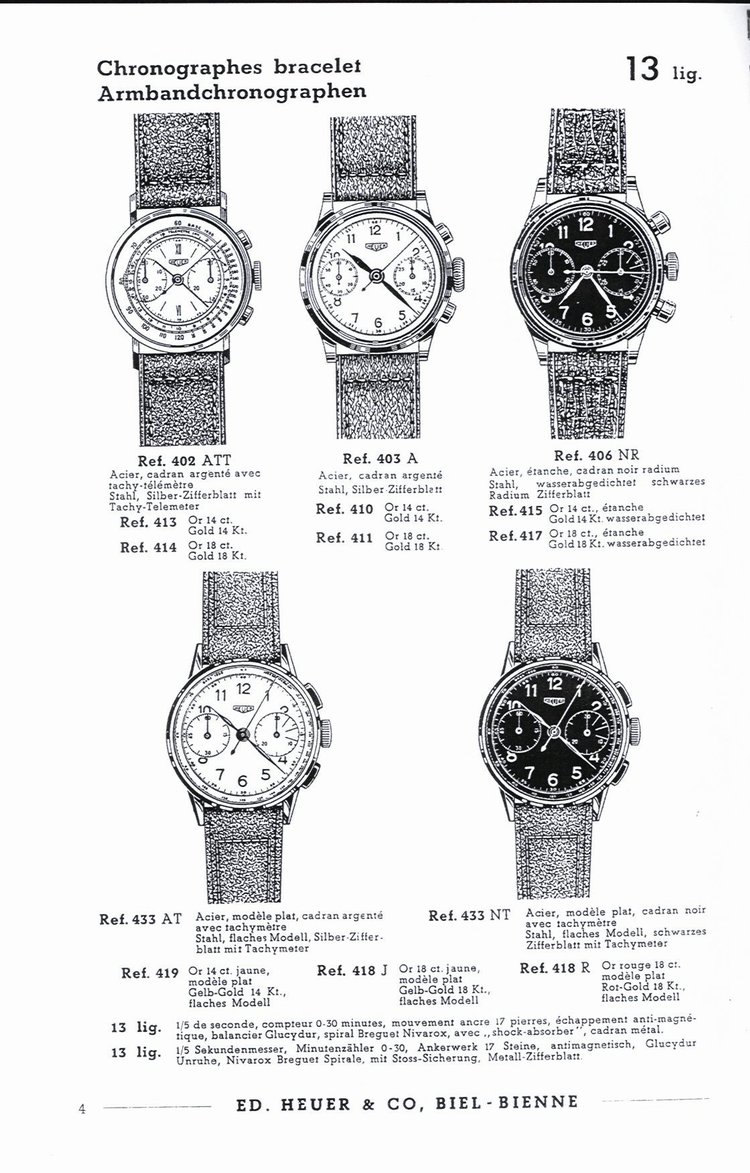 Also interesting is that we see 14-carat gold watches alongside the now more familiar 18K. And, almost as a footnote, one of the watches is also available in a rose gold version as well as the yellow gold, which was to become Heuer’s “usual” option for gold watches.

Rose gold is something we will return to later but worth touching on briefly here. It is typically a compound of gold with copper, with 75% gold purity (i.e. 18-carat) giving rose gold and closer to a 50:50 mix giving what is often called red gold. David and I discussed gold before I wrote this article and we both expressed a preference for rose gold over yellow. Personally, I find it a subtler metal than the brightness of yellow gold. There needs to be enough copper though, a slight pink blush isn’t enough for me – we’ll see some watches later where TAG-Heuer get it right and mention should also be made of Rolex’s “Everose” gold, which uses some platinum in the mix as well as the gold and copper to skew the colour more towards the pink than the red. White gold is typically a mix of gold with nickel or palladium – the nickel can be a skin irritant so white gold watches with nickel are often rhodium plated to avoid that irritation. That is somewhat unsatisfactory though, given that the colour you see as a result is the rhodium, not white gold at all. There are other coloured golds, such as green, blue and grey but they are typically used more for jewellery than for watches – to the best of my knowledge they have never been used by Heuer or TAG-Heuer.

Initially, the gold watches did tend to be solid gold, of either of the two purities above. As time goes on though, we see an increase in the number of gold-filled and later gold-plated watches, so that these overtake the solid gold watches. But for our tour, we’re focussing on the solid precious metal watches so we will gloss over these others for now.

It might surprise some of our readers that even some of the Heuer stopwatches were available in gold too: 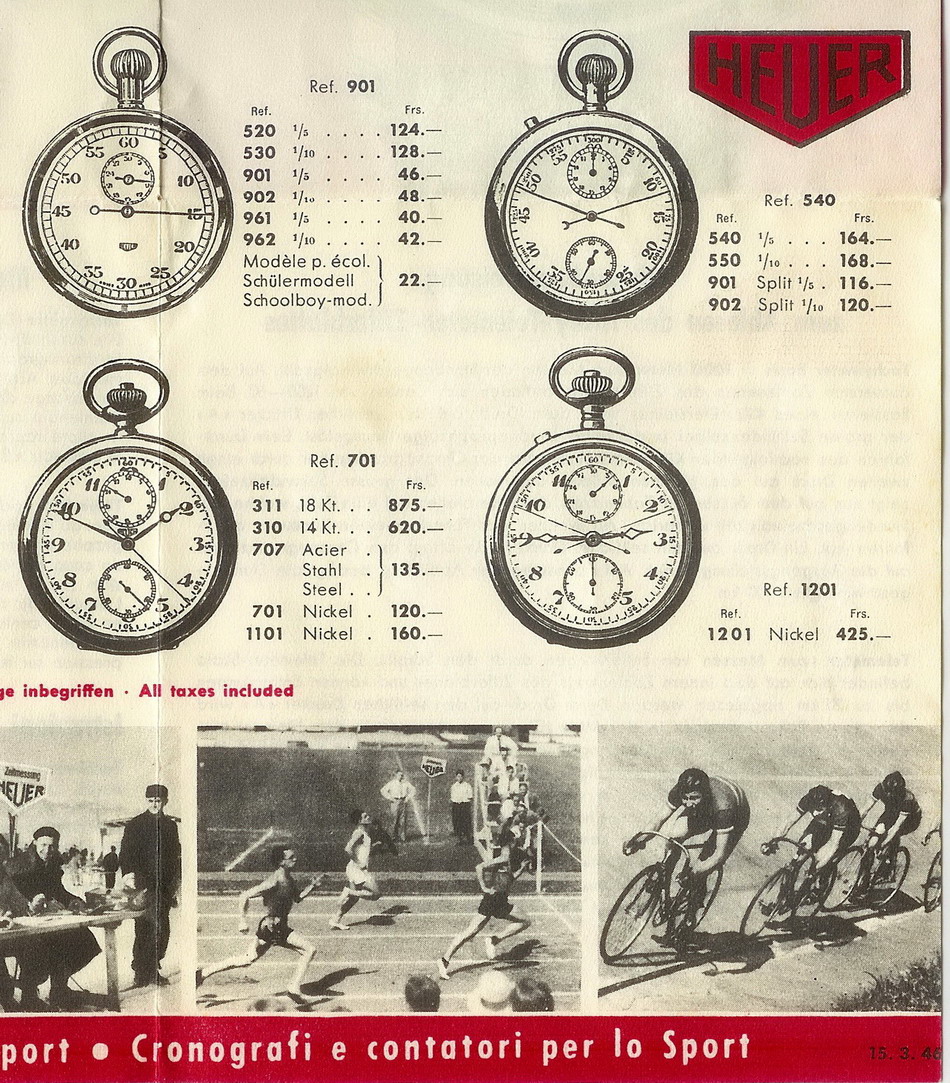 Definitely something to catch the eye at a track meeting!