Scales. Indispensable to the obsessive cook, but also something that has clinched the sale of a few watches over the years too.

Some scales are more or less essential, like the days marked around the outside of the dial on a perpetual calendar:

Others add additional functionality to the watch and it is these we will be looking at in this article. It’s interesting to see how trends in these sort of scales come and go – some are rarely seen in modern watches whereas others are just as popular as they ever were.

Let’s start with one that’s not been that popular for many decades now.

In the 20s and 30s, it was common for a watch to have several scales on its dial, making it versatile but doing few favours for its readability. 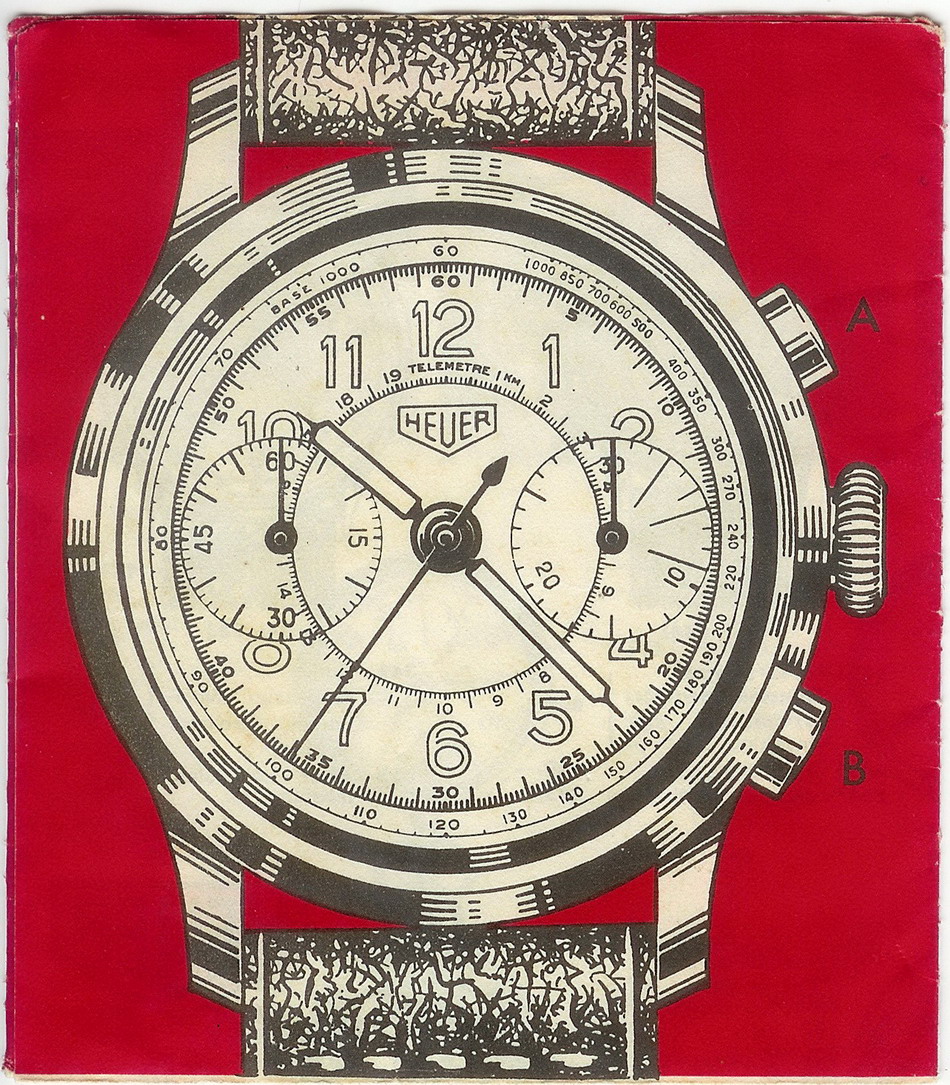 The example above, for instance, has hours and seconds marked as well as an outer tachymeter scale in addition to the one we’re interested in, the telemeter. It was usual for the telemeter to be the inner scale on a watch with multiple scales, rather than finding it by itself. You’ll note that it is marked in kilometres with divisions showing 1/10 km too and that gives away its function. As does the word itself, its components coming from the Greek têle, meaning “far”, and metron, meaning “measure” (or arguably the Latin metrum), so a way of measuring distance. Specifically, in this instance, range-finding.

The same Heuer catalogue from 1946 gives a great explanation of how this works: 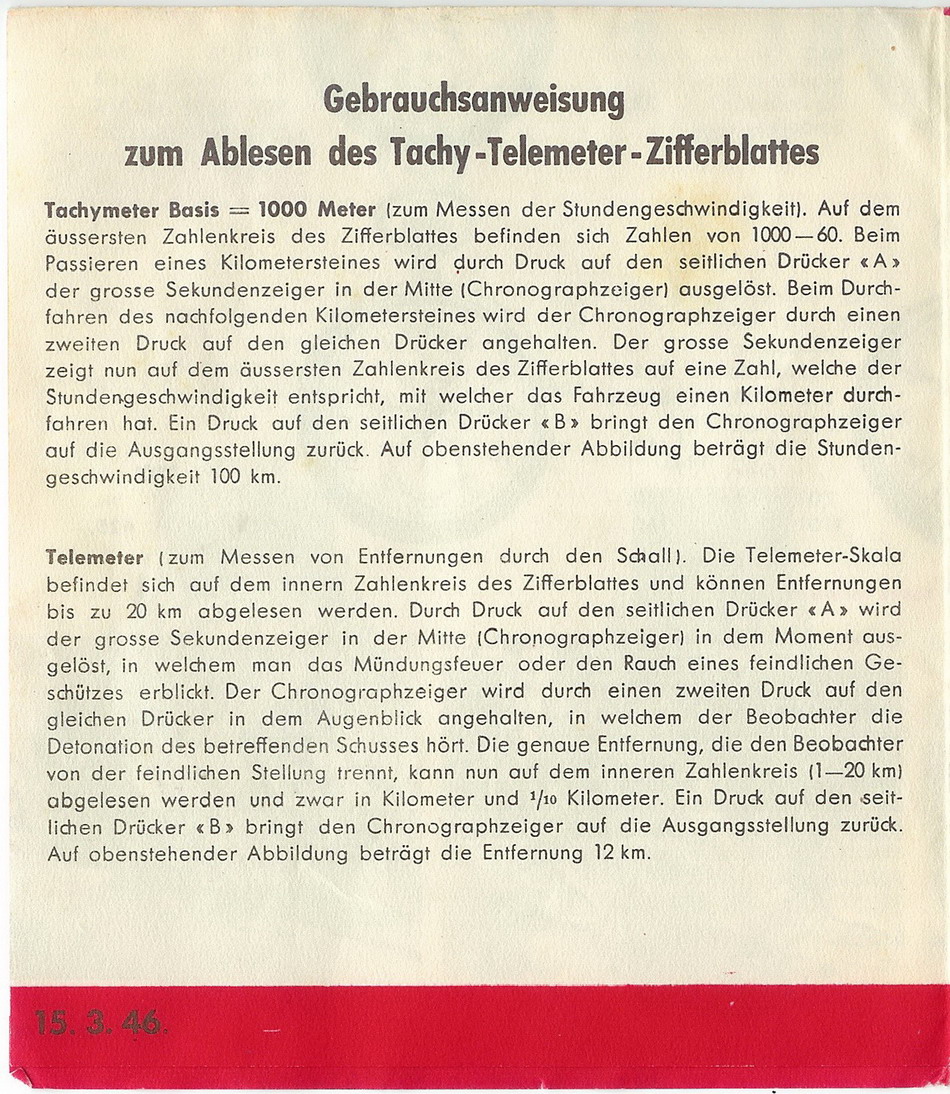 Ummm. You may have noticed that that’s in German, unfortunate if you can’t read the language. The English version in the catalogue is disappointingly sketchy. The gist of it is to press the top pusher once when you see either the muzzle flash or smoke of enemy gunfire and press it again when you hear the detonation. The distance of the gun can then be read from the telemeter scale and, presumably, the range set of your own artillery to reply.

It’s pretty obvious why this scale became less popular after WWII but it’s still possible to find the occasional watch that includes this scale today, just not on any TAG Heuers.

Here’s a nice example of a heavily patinated, but typically colourful, telemeter Heuer from around the 1930s: The telemeter scale is the blue inner one, again calibrated to 20 km as the catalogue illustration above. More information on this specific watch can be had on collector Stewart Morley’s blog here .

The tachymeter is by far the most popular scale on Heuers and TAG Heuers over the years, and one that cemented their links to the motor racing world.

The primary usage of the tachymeter is to measure speed over a fixed distance. The pusher is pushed once at a specific point and again once a second reference point is reached, such as the mile markers on a motorway. Or the kilometre markers on an Autobahn come to that, as the beauty of the tachymeter is that it is agnostic to the units that are being measured. This is explicit on the bezel of most Rolex Daytonas, which are marked with “units per hour”. That didn’t stop a number of manufacturers, notably Tissot, thinking that the markings were specifically kilometres and releasing watches with the measurements “converted” to miles:

In the telemeter watch above, we can see the tachymeter scale in red, but in the 50s and 60s, the trend was more towards having the tachymeter as the sole scale. Somehow though, the practice of having this scale in red stuck and in that period we often see tachy scales in red.

In the 50s, the Heuer-made Abercrombie & Fitch Auto-Graph set a precedent using a stylised script for its tachy scale and variations on this were used by Heuer for over a decade:

The Carrera was introduced in 1964, espousing the values of simplicity and clarity, but it too was available with scales, including a tachymeter: 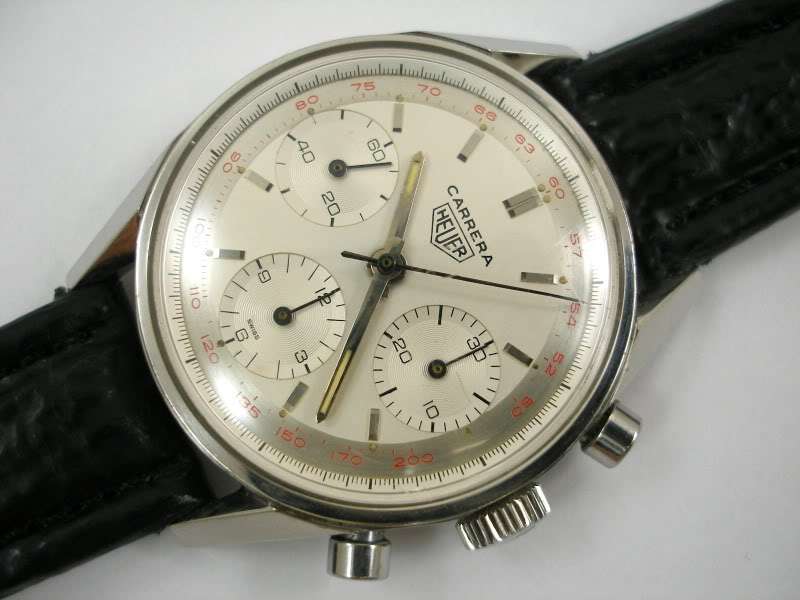 Into the second generation of Carrera from 1969 on, the tachy scale even became the default fixture as an inner bezel: 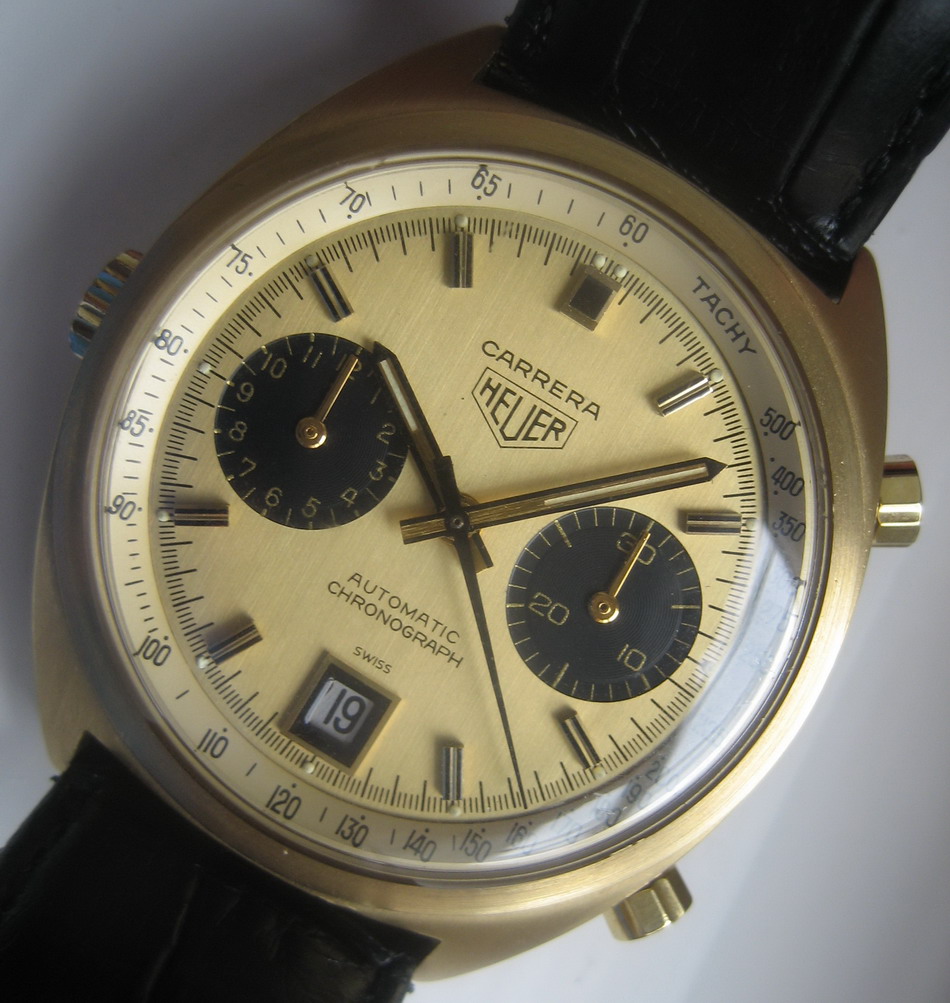 With the phasing out of Heuer watches, and greater emphasis on 1000, 2000 and 6000 series etc. tachymeter watches became scarcer, but there are still watches with prominent tachymeters. A good example are many of the watches featuring McLaren branding, in keeping with that link with racing: David has previously covered some of these watches here and here.

The introduction of the re-edition watches might have been the point we expected to see more tachy watches again, but in fact TAG Heuer chose to go a different route with those early Carreras. We’ll look at the scale they did use next. But as soon as the Valjoux 7750 models hit the market, we again saw the dominance of the tachymeter, with this scale being clearly displayed on the external bezel of these Carreras:

It was also a fixture of the equivalent bezel on the Autavia reissues:

It’s now an expected feature of a “sporty” TAG Heuer, though interesting to note that it was dropped for the 2nd version of the Carrera 1887:

Now, back to that scale that was on the first Carrera re-editions.

Back at the start of the 60s, when the red tachy scale was offered on several of the watches in the range, there were also a couple of other optional scales offered alongside it. We’ll come to the third later, but for now we’re interested in the decimal scale, where each minute is divided into 100 portions.

This is used more for industrial and scientific timings than for racing like the tachy. On the watches, this scale became established as blue to the tachy’s red: 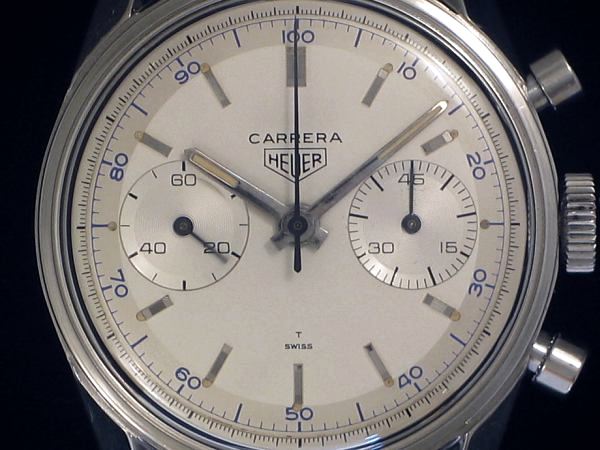 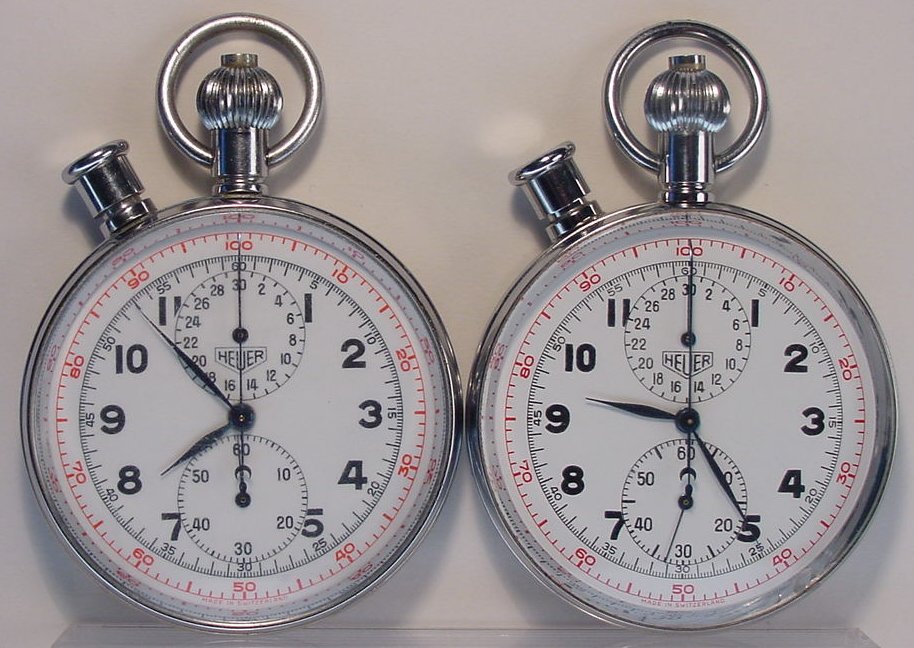 The deci scale was reasonably in less demand than “plain” dialed watches and tachys, as its use was more restricted but the blue scaled first generation Carreras were distinctive and are still seen fairly often today. Later watches had a black deci scale and were less distinctive and, to my mind, a bit less attractive: 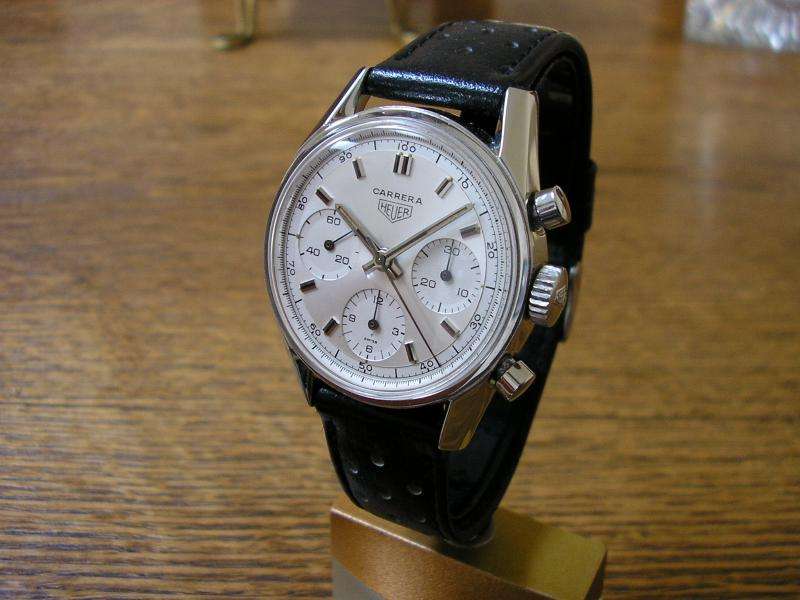 With the introduction of a tachy bezel as default on second gen Carreras, deci scales become much scarcer but still turn up occasionally as watches fitted thus were available to special order: 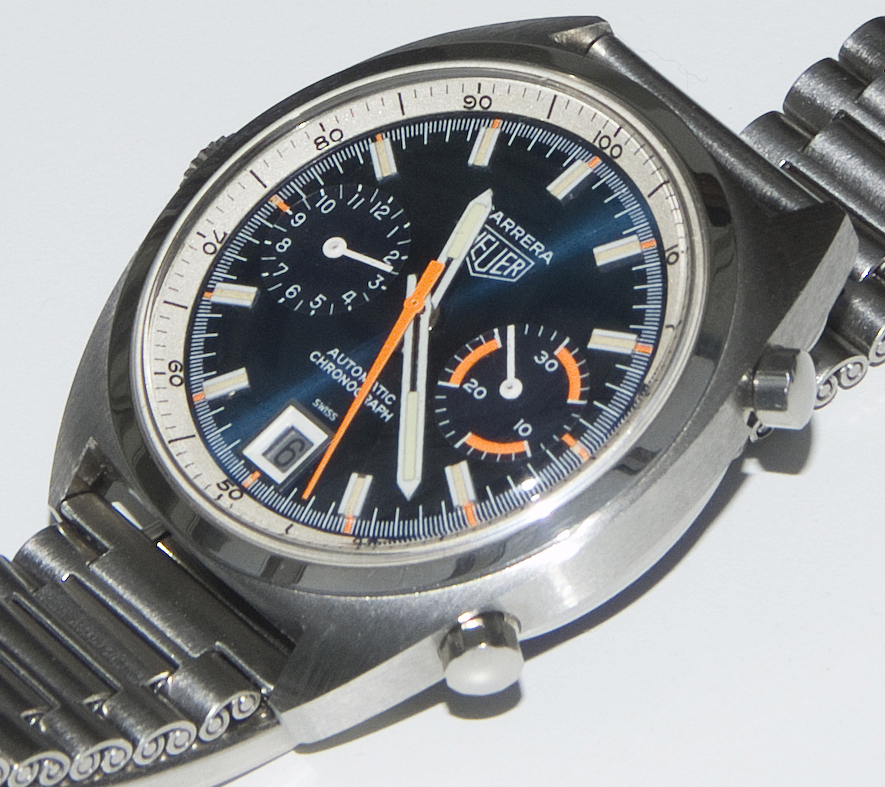 It was back to the most distinctive, blue-scaled watches that TAG Heuer chose to refer to when launching the first re-edition Carreras:

Deci scales weren’t available on the black-dialled watches in the 60s, but the white on black TAG Heuer chose refers back to the white-on-black tachy watches of the 60s. It too works well and in fact the later automatic version is my daily wearer when I don’t want to wear vintage: 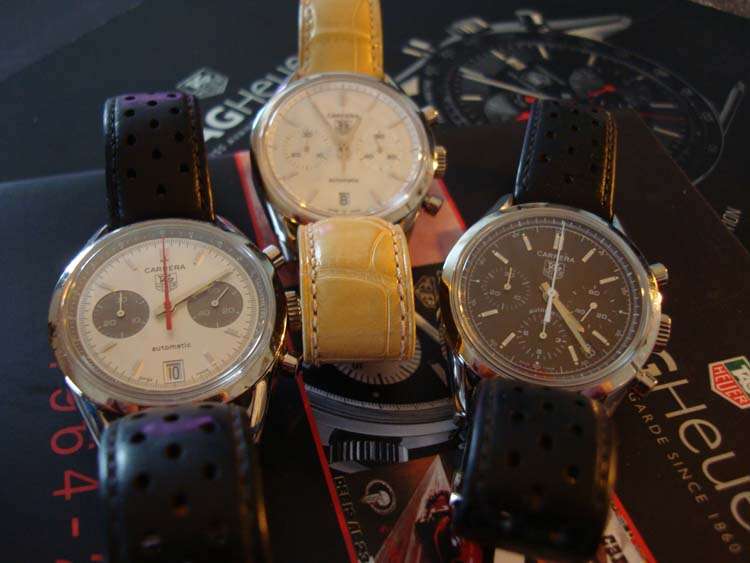 I will confess to having never actually used the decimal scale though!

The third scale I referred to above is this, the pulsometer. One that Heuer is justifiably proud of, having held the patent for measuring the pulse rate on a watch or stopwatch since 1908.

There are some Heuers from that very early period with pulsometer scales but it, like the decimal scale, is quite limited in use so the watches are much rarer than tachys.

The scale works by counting out a specific number of pulses, usually 15, and then referring to the marked number on the scale to derive the pulse rate. The scales are usually marked with the number of pulses to count, as shown on the Carrera below by “Base 15”. The first watch with a scale I remember owning was a pulsometer – a non-chronograph Swatch, it nonetheless worked in the same way, by counting off 15 pulses when the second hand hit 60 and reading the result from the scale.

The average pulse rate for an adult is 60-100 so watches with combined scales often only show the pulsometer scale for 15 seconds, not expecting to need to measure pulse rates below 60. Michael Schumacher at his peak famously had a resting heart rate in the mid 30s, but during races an F1 driver’s pulse rate rises to over 150. The Carrera 2447 P was intended for medical professionals so can record pulse rates lower than 60 – in fact, although the lowest number it shows on the scale is 20, it could even be used to measure someone with no pulse at all! Although in that case, a watch is probably unnecessary… 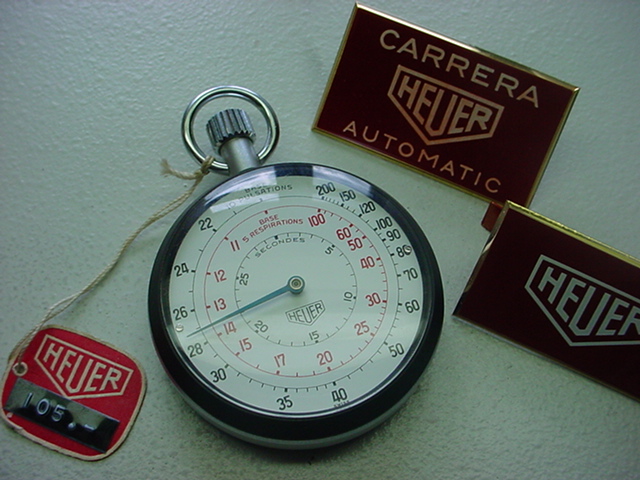 One of the rarest and most attractive first generation Carreras is the 2447 P featuring a pulsometer scale in blue:

These very rarely turn up as inner bezels on second generation Carreras too: 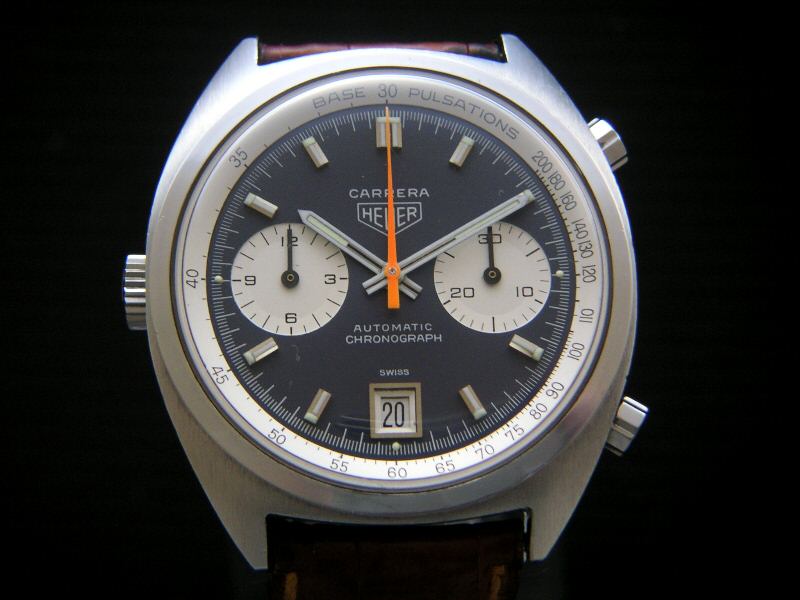 It’s something I wouldn’t mind seeing again in a modern TAG Heuer watch.

By rights of course, the watch I show as a telemeter watch belongs here as it also has other scales on it. But here I was thinking more of a number of watches Heuer released during the 70s combining pulsometer and tachymeter scales on a single bezel, as demonstrated by this “no name” Monza, so-called because the model name doesn’t feature on the dial: 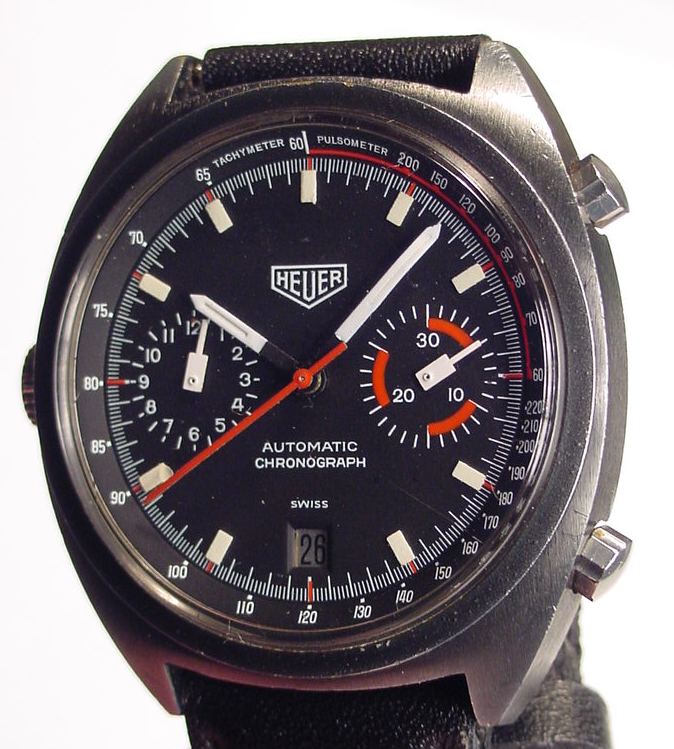 The pulsometer specific portion is marked in red, the remainder is the tachy scale, making it slightly less intuitive in operation than a stand-alone tachymeter.

This particular scale was characteristic of a number of models, such as the Calibre 12 Montreals,:

and the relatively little-known Temporada:

I would also include in this category perhaps the ultimate expressions of Heuer and TAG Heuer scale watches, the Calculator and Pilot.

The Calculator is a “slide-rule” watch with a rotating bezel allowing conversion between a number of different units, as well as the usual chronograph functions.

Some versions without the Calculator name on the dial lacked the unit conversion bezel but instead had the familiar tachy/pulso combined scale:

The Pilot, available with either automatic (with a Lemania chronograph module piggybacked on an ETA movement) or quartz movements, is something of a Heuer take on the Breitling Navitimer.

The earliest watches are Heuer branded, from around 1983: 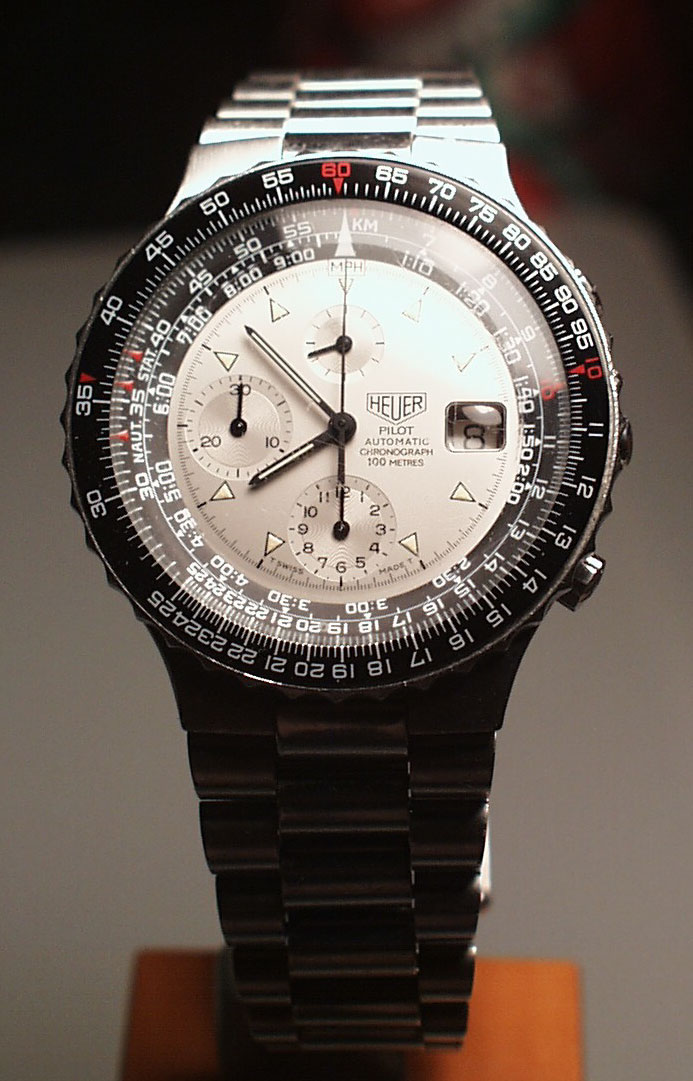 before becoming TAG Heuer marked during 85/6:

The outermost bezel rotates, the two inner ones are fixed. Similar to the Calculator, the watch can be used for multiplication and division and also for functions that particularly benefit the aviator, like distance travelled, speed and length of journey for a given speed and distance.

With TAG Heuer currently pushing the boundaries of what mechanical watches are capable of in terms of precision, some of the watches have required specific scales to measure against.

Take for example, the caliper scale on the Grand Carrera Caliper: where various scales are combined to give the 1/10th of a second precision of the watch.

The Mikrograph, at first glance, looks like it has a familiar decimal scale:

but is in fact for showing the 1/100 second accuracy of the watch.

The Mikrotimer has the additional challenge of showing 1/1000 second timings:

The difficulty is in resolving such astonishing precision with a scale that is readable and understandable.

I think it’s clear we will see a mix of plain watches and tachymeter scales for most of the range, with some of the haute horlogerie watches requiring special scales. It will be interesting to see if some of those advanced watches can combine their timing scales with a tachymeter. Other watches, like the Monaco, have traditionally been scaleless and again it will be interesting to see if and how TAG Heuer incorporate any scale into those designs. It would be nice to see some decimal and pulse scales amongst the range in the future too – perhaps the forthcoming “Heritage” Monzas and Carreras would be best suited to carry a pulsometer scale? Some food for thought…